What I learned from Navaratri 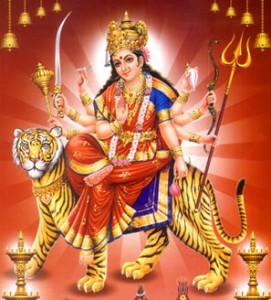 From 1st April (no April Fool’s Day joke) to 9th April this year in India the festival of Navaratri was celebrated ‒ literary the nine nights of the divine Mother (nava meaning ‘nine’ and ratri – ‘night’). It is solely through the power of Shakti, Devi Maa, that the demonical forces are slain and righteousness takes victory over darkness.

These nine nights have their own metaphor and symbolism. They are divided into three groups, of three nights each, associated with a particular Goddess.The first three nights are Kali’s. She annihilates our ego, everything bad and deconstructive. Kali literary means ‘black’ or ‘a slayer of time’. She’s the most ferocious of all the ten ferocious tantric Goddesses. They are all very terrifying and just imagine what Kali looks like!

After Kali has destroyed the negative traits in us, comes the turn of Mother Laxmi. Known as the Goddess of prosperity and wealth, both material and spiritual, she bestows on us whatever we are missing or lacking. The negative qualities once eradicated by Kali must be replaced with their opposites. Laxmi is depicted with lotus flowers in her two upper hands and golden coins are pouring down from her right lower hand forming a pile on the ground.

Once the negative has been destroyed and substituted with its opposite quality, the higher nature or knowledge comes. These are the nights of Saraswati ‒ the Goddess of all arts and learning. She is serene and dressed in white, holds a veena (a musical instrument), a rosary and a book. A swan, representing the right discrimination is invariably beside her.

The movement from the fearful Kali to the benign and beautiful Saraswati is the ultimate purpose of Navaratri celebration – the journey of the soul from total ignorance to luminosity and enlightenment.

My first Navaratri in the ashram in India

It was the year of 2010 and Ashvin Navaratri coinsided with my visit to the ashram. The celebration had just started, when Swamiji went abroad on a scheduled program in Greece. Before she left the ashram, she gathered everyone (both residents and guests) and gave us a beautiful satsang about Navaratri. What I learned then was that Durga is the sattvic or benign form of the Goddess and Kali – the tamasic or dark one. We were told we should not be terrified by Kali. She is the one who cuts our ego and pride and sets the transformation. After all how can one make an omelette without breaking a few eggs? The second thing I learned was that the dark nights symbolize the soul’s journey from ignorance to knowledge. In this celebration the individual soul is guided on its way to light by the three major Goddesses.

Initially, as a Christian, I tended to perceive God as He, as the absolute consciousness or higher consciousness, it really doesn’t matter how you call it. The point is that I have always thought about God in the masculine gender with all its male characteristics ‒ like strength, toughness, power, etc. I used to belittle the role of female Goddesses and their mercy, thinking they were inferior and lacking power. What I have learned from my spiritual path is that the worship of God as a mother is the most ancient, profound and is regarded as the best worship. Swamiji ironically jokes that “The father is unknown, one knows for sure only who the mother is” (paraphrased). This sentiment is very well expressed in the following verse in one of the hymns to Devi (or Goddess): “The child can be bad; however it is not in the mother’s nature to be cruel”. (Devi aparadha ksamapana stotram by Adi Shankaracharya) Only the female form of God can bestow us that so desired forgiveness and pardon.

Another importance of the Goddess worship is that Shakti (or supreme energy) is the active force in this world, whereas Shiva (or supreme consciousness) is the passive and static one. While Shiva looks indifferently at the maya of creation, Shakti is the one who actively interferes in the worldly affairs. That’s why it’s wiser to ask for her help and blessings because she is the one who controls the three gunas, or qualities of nature – tamas (darkness, inertia), rajas (motion) and sattva (balance, goodness). Keeping this in mind, let’s invoke the divine Mother, our true mother to help, protect and guide us on the spiritual path. As Sri Swamiji put it “just as there’s fast food, in the same way there’re fast blessings from Devi”.

The invoking of Devi can be made through singing a mantra, bhajan or any hymn dedicated to Shakti. A lit candle and incense will also help. But one must keep in mind the most important thing ‒ Devi speaks and understands only the language of the heart. Therefore, be sincere and don’t worry about mischanting Sanskrit or anything else. What God cares about is the dedication and faith of the aspirant. That’s all.