Are you ready for the nuclear age? 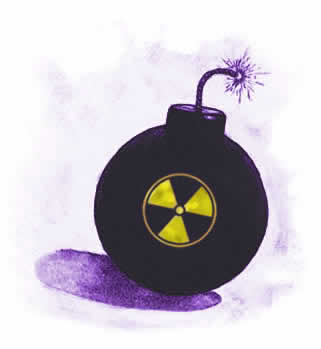 First there was the industrial era, followed by the technological era and now we are at the threshold of a new era – the nuclear age. How does this relate to our day-to-day lives and our place in the world?

Change is all around us – nations are rebelling against political systems, governments collapse, the world economy is still regressing despite the increased number of wealthy people…  Sounds like an apocalyptic movie, doesn’t it? Actually the present time is not that scary. We are living in exciting times full of opportunities, a lot more than 50 years ago. Some of us may not even realize the great change coming into our lives maybe because we are so involved in it.
What is the nuclear age?

Seventy years ago scientists released nuclear energy from relatively small amounts of matter and made the first nuclear weapons. In each atom and element in the universe there’s greater energy knows as potential or Shakti. That energy, Shakti, is the most powerful and refined energy known to mankind. It can destroy everything within minutes melting it away. The scientists succeeded to release that energy through nuclear reactions – either fissing or combination of fissing and fusing the elements. In the same way, man and everything in the nature have that dormant Shakti or potential inside the body, inside the matter. It only has to be exploded. This is the primary purpose in tantra – to release the energy and to expand the mind.If one is able to split and separate the different layers of consciousness, an inner explosion takes place. This inner explosion is no other but the actual awakening of Kundalini.

How to release the energy?

There are different ways in which Shakti or the nuclear energy can be released. The great masters and gurus have given us the yoga practices. They are a slower but a safer way. If one is persistent and regular, change is bound to happen.

Of course, there are shortcuts as well, as I mentioned in one of my previous posts but how many people can undertake such a task? For example, going to a burial ground in the middle of the night to practise meditation? This sounds crazy enough for the majority of people.

Another way is to serve and give to the humanity. Isn’t it what all saints and prophets have taught us? Isn’t this the milestone of Jesus Christ and Buddha’s teachings? We are not supposed to be separated, narcissistic individuals, we should all be one community despite differences in the social status, nationality, gender, religion or sexuality. When someone is sick and frustrated their thoughts are immediately spread to the rest of us. We should not selfishly enjoy only our wealthy, luxurious lives ignoring the hunger and suffering of the less fortunate ones.

What to do with it?

In our strange age helping others, especially the deprived and suffering ones, evolves and uplifts one’s spirit rather than doing yoga postures from dawn to dusk. Yes, I myself also practice hatha yoga but helping others is the real deal for me. Since I started my blog and writing articles with advice, people have begun to ask me about health issues. If through my advice, words or energy someone recovers or feels better that’s the ultimate purpose. Name, fame or money are distractors. They only bind one to the gross matter and obstruct the release of Shakti. What one searches for is always inside. Peace, devotion and prayer are the characteristics of  a refined awareness. It is through faith that we can enter into it. The father of the atomic bomb, Robert Oppenheimer once quoted a verse from Bhagavad Gita:

“Man is a creature whose substance is faith, what his faith is, he is”.

The keynotes of the upcoming age will be those of faith, sharing, love and service. People all around the globe have already started questioning the political systems because we see clearly that politicians don’t care about our well-being. In this century more and more individuals will go on their own ways either in society, arts or preaching to others. More and more people will stop depending on established publishers or music labels in order to distribute their artwork. And we are all becoming witnesses of that. People will be attracted not by the big companies but by the message and the purpose behind one’s efforts and actions. If a person is earnest, helps the humans and inspires their inner light to shine, this person will be the most popular one, not politicians or celebrities.